As a heavy user of iptables NAT rules, (advanced home networking, various VPNs on EC2 and other IaaS providers), I feel it’s time for me to better understand how NAT works under the hood with the help of iptables.

That’s why I started reading iptables tutorial for the second time.

NOTE: I personally think it is the best iptables tutorial freely available (even better than some published books). Look at no others ;-D

The first time I read iptables tutorial back in 2012, I was frustrated because my networking knowledge and skills were not up to the level the tutorial requires. So I ended up cherry-picking the useful parts only ;-(

Now it’s totally different, many thanks to XenServer and continuously learning.

Both targets do source NAT (or SNAT) in the POSTROUTING chain in the nat table.

IMPORTANT: It is still possible to use MASQUERADE target with static IP. Be aware that it will add extra overhead (to compute).

For example, network 192.168.100.0/24 is used for IPsec (strongSwan) clients, so-called right subnet which is the private subnet behind the left participant (IPsec Server). VPN Clients will be assigned IP addresses within the rightsubnet as defined in its connection.

For IPsec VPN clients to be able to access the Internet, NAT MUST be done by using iptables. Outgoing packets need to have their source IP address rewritten to the router (gateway) IP address in their IP header.

Match packets from the 192.168.100.0/24 network and are leaving from eth0 (interface name can vary based on different hypervisors or Linux distributions - systemd VS sysv init).

NOTE: Don’t have to do DNAT for incoming packets within the PREROUTING chain in the nat table if we turn on ip forwarding in the kernel by echo 1 | sudo tee /proc/sys/net/ipv4/ip_forward so as to forward packets between interfaces, cool!

Above indicates that basic zone networking uses Linux Bridge, the Security Group implementation is based on Linux Bridge and iptables.

Use to match packets based on the identity of the process that created them.

NOTE: The owner match only works within the OUTPUT chain, for obvious reasons: It is pretty much impossible to find out any information about the identity of the instance that sent a packet from the other end, or where there is an intermediate hop to the real destination.

Even within the OUTPUT chain it is not very reliable, since certain packets may not have an owner. Notorious packets of that sort are (among other things) the different ICMP responses. ICMP responses will never match.

Last but not least

I started learning iptables systematically in 2012, soon addicted to it and kept sucking everything that I didn’t know or understand. Countless hours spent…

Plus over 2 years field experience with XenServer (Cloud Infrastructure), I can claim that my Linux networking skill has leaped to a new level ;-D

The leap all started from in-depth learning of iptables, it’s worth it ;-D

Below is the Traversing of tables and chains diagram, just to pay tribute to the author of iptables tutorial - Oskar Andreasson ;-D

NOTE: Oskar wrote the excellent in-depth tutorial 10 years ago, imagine how good he (his networking) is now ;-D 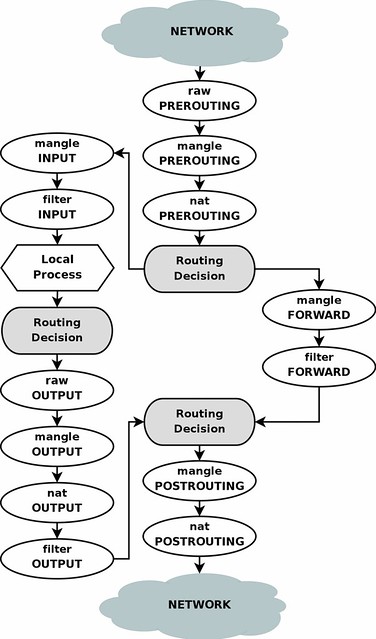