I have been using Ksplice on Ubuntu / Ubuntu Server since 2011 after Oracle acquired Ksplice. It’s great technology and tool to minimize downtime and maximize server uptime, especially to those servers running in the cloud. Works like a charm. On Ubuntu, it even offers support for LTS releases running the latest HWE kernels, it just rocks!

Ksplice has been running since I spun off my Digital Ocean (KVM powered) VPS, its uptime is close to 300 days (298 days as of now). The Ubuntu 12.04 LTS instance is running the original release kernel 3.2 (DO currently does NOT offer kernel upgrade…), it’s been taken care of and updated to the latest. See below :-D 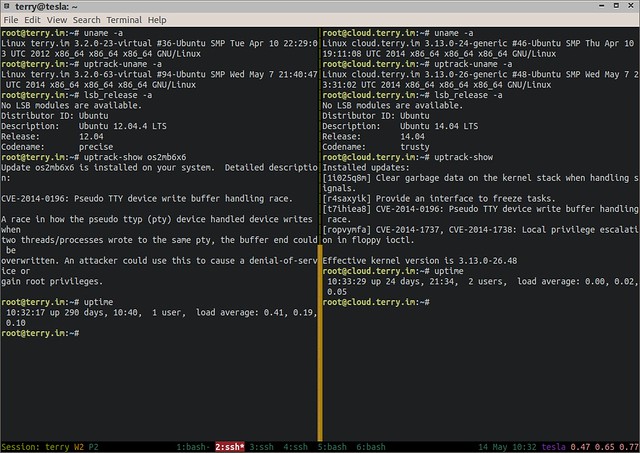 shows that 317 patches have been applied.

NOTE: Ksplice is free for Ubuntu / Ubuntu Server and Fedora.

Now, Ksplice is no longer the only player in Dynamic / Live Kernel Patching.

Wow! All of a sudden we have 3 players.

Looks like both SUSE and Red Hat are pushing hard trying to make their own dynamic/live kernel patching code into the upstream Linux kernel. Who will win? Up in the air, too early to say.

Playing with kpatch on Ubuntu 14.04 LTS

I’ve seen kGraft demo video by its main developer Jiri Slaby, looks pretty cool. But due to the lack of documentations, it’s hard to get started and try it with my own hands.

kpatch source code is hosted on GitHub, the README contains enough information to get started, time to give it a shot!

To be quick, use a Ubuntu Vagrant image or Opscode bento image to start with.

NOTE: dbgsym kernel (with debug symbols) is as huge as 401M, but it is indeed needed!

NOTE: Above is the 2nd build, that’s why it used the cache. If it is the 1st build, kpatch will trigger download of the kernel source code and other required packages, extract it to $HOME/.kpatch. Look like below. 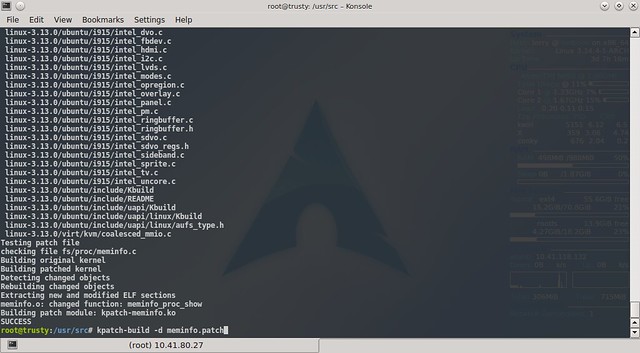 Done! kpatch-meminfo.ko will be output to the current working directory.

Apply the patch to the running kernel

Unfortunately kpatch assumes insmod and rmmod reside in /usr/sbin which is NOT the case on Debian and Ubuntu. By looking at the code, I was able to figure out how to run it manually. 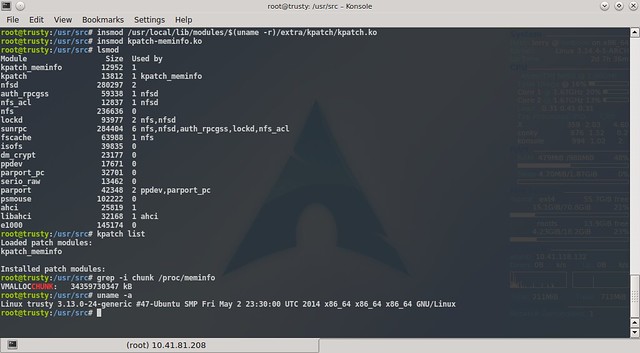 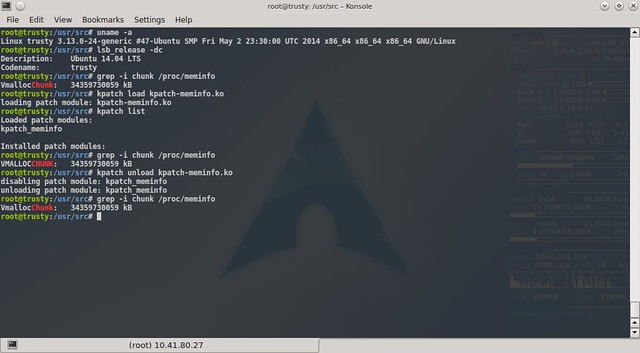